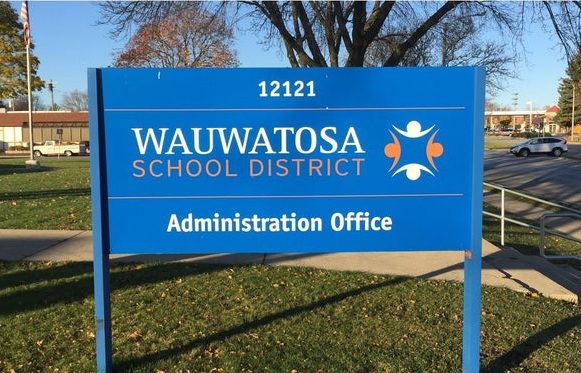 Well, it’s autumn in Wisconsin. The leaves are changing color, the squirrels are storing acorns and another hyperbolic Wauwatosa Schools ‘crisis’ that has recently elected activists trying to gain a bigger share of our wallets by creating fear in our hearts.

Yes, once again the metaphorical sky is falling. Only this time, it’s more like the roof is falling.

Several years ago, the usual social justice crisis peddlers signed the recall against Governor Scott Walker and went after Act 10, because schools would close and the sky would fall. In reality, Wauwatosa Schools benefitted by saving millions of dollars under Act 10. No, the sky did not fall.

Then, under the guise of a ‘non-partisan’ concerned parents’ group, called SOS (Support our Schools), these same activist social justice warriors attacked the legislative budget by saying cuts were coming and there would have to be the proverbial cuts to arts, music, and the like. In reality, school funding actually went up and once again the sky did not fall.

Knowing that they were losing, the same social justice warriors decided they needed to run for local offices and got elected by hiding their hyper-partisan agendas behind the ‘non-partisan’ label.

Just mere months after winning seats on the city council and the school board, it’s no surprise that Wauwatosa has seen the likes of the recently failed sanctuary city proposal and now the sudden urgent need to have a referendum to raise $124.9 million. More on that number later.

First, a crisis needed to be created. The school board and members of the administration needed to identify all the issues with all the facilities across the city.

Of course, the school administration has people on the payroll to be able to assess such needs, but this is government after all, so they decided we should spend even more money. They created a Facilities Advisory Committee (FAC), that was really designed to provide insulation for the Administration and the School Board.

The FAC was basically a group of Wauwatosa residents to facilitate. Together, the board and FAC worked in conjunction with PRA, the architectural firm hired to conduct building surveys to determine all of the needs. Incidentally, isn’t this supposed to be the job of the administration facilities staff whom we are already paying for? But I digress.

With this building survey, it seemed our entire infrastructure was suddenly crumbling. Of course, the survey recommended complete rebuilds and upgrades or the buildings would all but collapse on our kids. Yes, I am exaggerating, but not by much.

Building new schools for maintenance issues seems excessive. After all, who knocks down and rebuilds their house just because the furnace needs replacing?

According to the building survey, a whopping total of $350 Million would be required for everything. With that total in hand, the board had their ‘crisis’ and would need to create support from the community for a referendum and to see what amount they could get away with.

Front and center on the Wauwatosa Schools website one can see that 73% of survey respondents support the referendum. Strong support indeed. Right? Not so fast. That number is disingenuous and is hyperbole at its best. It’s less than 2,500 total respondents who actually said yes. Hardly representative for a city of nearly 47,000 residents.

What makes the Wauwatosa referendum unique is that its jaw dropping price tag, even at $124.9 million, is still the second highest out of 81 referendums across the state and is basically double the next in line. And yes, School Perceptions is involved in most, if not all of those referendums as well. See a pattern?

As with anything involving government entities, that price tag is only the tip of the iceberg. The school administration, school board, and the VJS funded group of highly organized supporters are intentionally misleading Wauwatosa taxpayers by not being forthright about all the facts. Yes, the facts are there, but you really have to dig for them.

As with any major project, the devil is in the details. The $124.9 million figure does not include 20 years of interest. Being generous at 4%, the price is closer to $200 million over 20 years.

If that were not enough, passing this monstrosity would most certainly cost Wauwatosa Schools $5.4 million per year in lost state aid. Or, to put it in a different way, that’s a total of nearly $114 million in lost aid over 20 years. This number comes from the state’s Legislative Fiscal Bureau.

Spending $114 million to get $124.9 million hardly makes fiscal sense. And that’s not even including the interest. With interest and lost aid, the REAL COST of this massive undertaking is about $311 million. Add to that, the fact that nobody has said how the loss of over $5 million annually will effect operations.

Wauwatosa School Superintendent, Phil Ertl verified that the proposed $1.88 Mill rate includes the interest, contingency, and the loss in state aid. The issue here is that they focus on the principal amount and the Mill rate, never once communicating the actual total cost. The Wauwatosa Schools website has all the daunting details literally buried so the average person is not likely to find it. This is most certainly by design.

To add insult to injury, Wauwatosa taxpayers are solely responsible for the entire price tag. There are over 1,000 open enrollment students from outside Wauwatosa who will benefit but will not have to invest a single dime of additional taxes to fund this.

Although seemingly well-intentioned, the building survey is missing several points and leaves open the possibility of Wauwatosa getting gouged. Anyway, if we are to take their findings at face value, several questions are raised. Clearly these problems did not happen overnight, so why weren’t they addressed when they would have been much less expensive to fix? Who should be held accountable?

A few years ago, Wauwatosa Schools received TIF money worth millions, but instead of replacing aging HVAC systems or making older schools ADA compliant, etc., they built new baseball and soccer fields. Yes, the fields are very nice, but they were not a priority. Of course, making those much-needed upgrades would have put the kibosh on this much needed ‘crisis.’ Clearly it would have been much harder to get a referendum for athletic fields.

Everyone acknowledges there are repairs that must be made and updates that must happen. The real question is the all or nothing approach this referendum represents. The only real beneficiaries are VJS and School Perceptions, since they will gain financially, while taxpayers will be on the hook.

Why is everything riding on this referendum passing? There is no ‘plan B’ to be found. We need to put all options on the table. Yes, this should also include the possibility of selling some of the buildings to help pay for the costs. The administration could be moved to the unused floor of Wauwatosa East High School and the Fisher Building could be sold. But, that’s just one idea.

Keep in mind, this referendum is only a partial solution. It replaces four schools and merely puts Band-Aids on the rest of the schools. What about those schools? This leaves the door wide open to request yet another referendum, long before we are done paying for this one.

Then, there’s the equity issue. Kids in four schools will get the cool new digs, while other kids remain in the older buildings. We saw a taste of this several years ago when iPads were issued to 1/3 of the 7thgraders. This created some unneeded animosity among those kids. No, it’s not the end of the world, but it is definitely a factor to consider.

Let’s not ignore the underlying agenda by several on the School Board. Even though state law strictly enforces the requested dollar amount, there is nothing forcing every dollar to be spent on the proposed projects. Basically, a windfall of cash for Shawn Rolland and his band of social justice activists to begin manipulating curriculum and other things to support their radical ideology. This is the real agenda and why they are pushing so hard. It must be stopped.

There is nothing wrong with having an ideology. Clearly, I have one, I just choose not to hide it, or for that matter, force it on taxpayers. My biggest issue is that they methodically got themselves elected in an effort to cram their ideology down our metaphorical throats without opposition.

They, along with their well-funded group of ‘concerned parents’, have created the urgent push to get this done at all costs. Conveniently, they have managed to stay below the campaign finance thresholds, so we may never know who is actually behind their funding. Although all signs seem to point to VJS and perhapsWEAC.

In reality, the sky or the roof is still not falling. Even according to Phil Ertl we still have time and the is no crisis. Wauwatosa Schools are at a crossroads, it’s time to revisit this and make some very difficult and realistic decisions.

Residents should vote NO on this referendum and the community should come together to discuss alternative options. We need to break this cycle of constantly going to the proverbial taxpayer piggy bank. If we truly care about our kids, we need avoid saddling them with so much debt.

-This article was originally featured on Wauwatosa patch.. https://patch.com/wisconsin/wauwatosa/agendas-misdirection-wauwatosa-schools-referendum