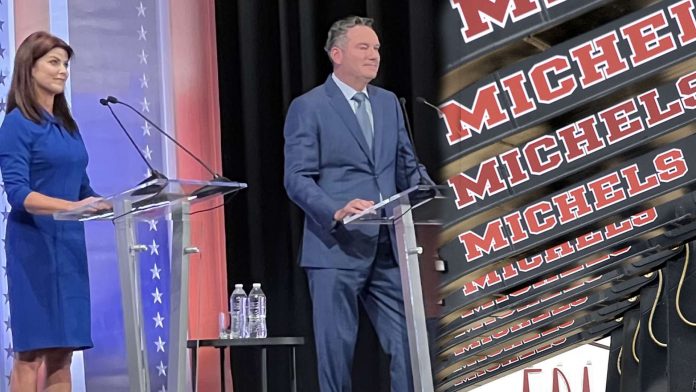 In recent weeks the Rebecca Kleefisch campaign has became more and more desperate since they saw polling numbers showing her ‘inevitability’ quickly slipping away to a relatively unknown candidate who has only been campaigning a few weeks.

A couple of weeks ago Kleefisch lobbed a ‘Hail Mary’ TV ad that without proof, falsely accused Candidate Tim Michels of wanting to raise the gas tax. She used a dotted line that Michels headed a trade organization that once lobbied for the gas tax. Her logic was guilt by association.

Michels strongly denied this and has said publicly he will not raise the gas tax.  More importantly, nobody has been able to come up with any evidence that he personally supported raising the gas tax whatsoever.

Now, she’s doubling down on the falsehood with a new TV ad repeating the lie.  Clearly it’s a mark of desperation by her flailing Campaign. The ads specifically talk about how ‘Tim Michels wants to increase your gas tax’ and other jabs like, ‘he’s just in it for himself.’

Why on earth would an extremely successful multi-millionaire businessman  subject himself and his family to personal attacks by Kleefisch, Scott Walker Tony Evers? The notion he is “in it for himself” is laughable.  Michels views this campaign as a call to duty to save our state from liberal policies of Tony Evers. He’s making an enormous personal sacrifice, just like Trump did, to help put our state back on track. Clearly his reasoning is that he wants to make a difference and affect change.

But you know what is rather interesting. At the so-called debate this last Sunday, Kleefisch made sure made sure she got a childish jab in about Michels not showing up to the last debate, that was important.

But oddly missing from any of her rhetoric or jabs was the gas tax issue that she is doubling down on. Why is that? After all, this is an issue that she feels is so important that she made multiple commercials on it. She didn’t raise the issue, because she knew she couldn’t defend her ads on camera with Michels there to refute them.  It’s as cowardly as it gets.  Carry a big stick in TV ads, but speak softly on stage.

Tim Michels knows Wisconsinites are struggling under record inflation and gas prices caused by the liberal policies of Joe Biden.  The last thing they need is a tax increase of any kind.  And a gas tax increase doesn’t make sense for businesses, either. It would simply raise the cost of goods and services which would be passed on to consumer.  Common sense tells you this is a dumb idea that no credible Republican candidate would support.

The Kleefisch campaign of ‘inevitability’ has been flawed from the start.  When Kevin Nicholson ‘broke her rules’ and entered the race, Kleefisch immediately went negative on him. The people of Wisconsin were seeing this, this was why she was locked t 32% after three years of campaigning.

Then all Hell broke loose because Tim Michels had the audacity to enter the race. Now, after years of Walker/Kleefisch collecting hundreds of thousands in campaign donations from Tim Michels and his family, Kleefisch and Walker have turned on Michels.

The desperation started after the first polls had Michels and Kleefisch neck and neck, then later showed Michels pulling away. Now the campaign has completely gone off the rails and spewing lie after lie.  What happened to Becky’s plan for Wisconsin? Why is she solely focused on tearing down Michels rather than building herself up?

Kleefisch is showing voters a darker side that suggests she is willing to do an say anything to win.  She needs this job.  Michels doesn’t.  So who is really in it for themselves?