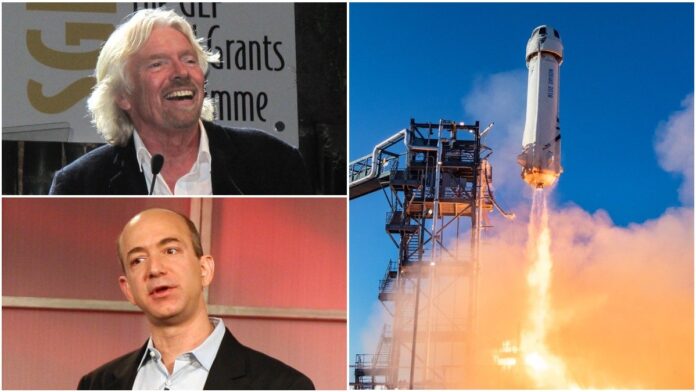 This article was originally featured in Wisconsin Right Now, CLICK to read it there.

Decades ago, space travel without the aid of government bureaucracy was unheard of. After all, the government was the only entity that had the resources and the ability to take on such a daunting task. Now, everything has changed.

Bring on the tech billionaires!

Let’s be honest, at its roots, this looks like more of a penis-measuring contest between eccentric billionaire playboys and their very expensive toys.  Nothing could be further from the truth. These launches have a much bigger impact than anyone could ever imagine.

With this week’s launch of billionaire, Jeff Bezos’ New Shepherd spacecraft, this is just the beginning of a new space race.  Last weekend, Virgin Galactic founder and Billionaire adventurer, Sir Richard Branson zoomed into space as part of the Unity crew in order to demonstrate his company’s space plane is ready for business. It all began about a year ago when tech Billionaire, Elon Musk spearheaded American’s return to space with his company’s Crew Dragon.

Before last year’s Space x Crew Dragon launch, it had been nearly a decade of the United States having to hitch a ride from the Russians. Now the United States is back to launching manned space missions from American soil. These missions by SpaceX, Virgin Galactic and Blue Origin are merely the next steps as we inch closer to bigger things than just rich tourists in space. This is about American excellence and pride because these missions started from here. It is also a testament to entrepreneurship and capitalism.

Let’s face it, it’s been decades since Americans have felt pride in being successful in space and now we can again. On top of being stagnant for nearly a decade, it has also been 52 years since Apollo 11 landed on the surface of the moon, one of the most pivotal moments in United States history.

In 2019 as I watched all of the 50th-anniversary coverage of Apollo 11,  I couldn’t help but wonder, what has happened to America’s drive and passion for excellence? Why did it take so long to be excited about space again?

We used to do extraordinary things because it was the right thing to do and simply to prove the seemingly impossible was indeed possible if we had people with the vision to see it through. Nothing personifies this drive for excellence in the way that our US space program once did. What happened? Well, politics.

What does this all have to do with politics? EVERYTHING!

Indulge me for a moment.

During the 1950s the United States was deeply embedded in the Cold War against the former Soviet Union. We were fiercely competing to beat the Soviet Union at everything, especially to be the first into space and beyond. When they ended up being the first, that American drive for excellence kept us from just sitting there and giving up. Instead, we continued, got better and had many firsts.

Then in 1961, President John F. Kennedy gave that famous speech where he challenged our great nation to land a man on the moon and return him safely back to earth by the end of that decade. Though he did not live to see it through, America rose to the challenge. The race was on to meet that timeline.

However, in early 1967, we lost Apollo 1 and three astronauts in a fire on the launchpad. Once again, we didn’t just sit there and give up, we continued. A short time later, the missions resumed. We were determined to meet Kennedy’s challenge. And in July 1969, we achieved the goal of landing a man on the moon. and returning him safely back to Earth.

The moon landing was a watershed moment in US History. We were unstoppable!

Fast forward a few years, our mentality had significantly changed, for the worse. Suddenly, the Apollo program was canceled because it was ‘too expensive.’ Budget cuts shifted the goal from huge initiatives to the space shuttles and a small station. We no longer had the drive to do the impossible. Americans had quite literally gotten bored with going to the moon.

A sad testament to the Liberalism of the 1970s, but there we were.

In spite of that, the American space program created visions of huge space stations, moon bases, even flying to and having eventual bases on Mars. Every child on the planet saw astronauts as heroes and many wanted to be one as well.

I was no different. As a young teenager in the 1980’s, I had my mind in the stars. I read books, loved Star Wars and Battlestar Galactica. My friends and I pretended like we were flying ships throughout the galaxy.

NASA started the space shuttle program, which had an elegant launch vehicle planned that could take off from an airport, launch the shuttle into space, then the launcher would safely return to earth.

Unfortunately, budget cuts caused the design to change to a launchpad and booster rockets. The shuttle program was to be a part of a huge space station, but because of those same cuts, the shuttle essentially became the program.

That all came to a head in January of 1986 when the Space Shuttle Challenger exploded shortly after launch. This was a truly devastating moment for the nation as a whole.

NASA was so desperate to have excitement again, that they had a huge PR campaign around their Teacher in Space program. This was exciting, at least to NASA leaders, because it would mark the first civilian to go into space and got NASA some much-needed attention.

NASA leaders gave in to tremendous media pressure and did not listen to NASA engineers who were begging to scrub the launch due to the coldest conditions ever on a shuttle lunch day. Because of that failure, the Challenger and its seven astronauts were lost.

Our drive was lost. Instead of striving to do difficult things, many had the mentality that it was ‘too dangerous.’ Because of that mindset, it took us over 900 days to return to space. The focus had completely shifted from pushing ourselves to excel to the fear of taking risks.

A few years ago the aging shuttles went into retirement and the United States, the nation that went to the moon and back, now had to hitch rides with the Russians. How’s that for Irony? The very people we fought so hard to beat had become our only means to get to space. Until last year, we had no manned space program to speak of. We lost our greatness.

The devolving of our space program is just one example of what has been happening to our great nation as a whole.

The difference? It’s quite obvious. Back then, we had visionaries for leaders, they inspired us to WIN, no matter the cost. The risk was part of the game and we all accepted it. Any expense was tiny compared to the benefits. As President Kennedy put it, ‘we do these things not because they are easy, but because they are hard.’

Over the years, most of our leaders chose not to challenge us, but to make us lazy. They lacked vision, basically sucking all of our drive and innovation out of our heads. The growing mentality to punish those who succeed and discouraging others from even trying. We no longer attempted things that were bold, simply because they were viewed as too expensive and too risky. NASA’s mission shifted to mainly unmanned missions. On top of that, we no longer wanted to compete with other nations, it was all about cooperation so everyone could get the warm fuzzies and signal their virtue. In other words, we had been witnessing the ‘wussification’ of our country and competition became a four-letter word.

Depressing? Maybe, but then, something happened that we did not expect, a chance to change all that. Conventional politics took a back seat to someone with unconventional vision to once again, bring attention and excitement to American excellence, and especially American excellence in space.

Yes, I am referring to President Trump. His hyper-focus on American excellence had once again unleashed the American machine to attain new heights. The Space program was no different.

His proposed ‘Space Force’ was a way to get us in the driver’s seat again. Of course, there are many, especially Democrats, who were laughing at the idea. Then again, there were many who laughed at Kennedy for daring to propose something so bold and unconventional back then.

Sure, the name did sound a little off the wall at first, but let’s focus on our former President’s VISION. Regardless of what people thought of him as a person, as leader, he was saying things to inspire and challenge us to work hard to bring about prosperity by leading the world in achievement.

At least he tried things that were different from the status quo. That’s more than the ‘nothing’ we had for years. In fact, the most important thing President Trump did was to make changes in NASA’s leadership. Under that leadership, NASA changed from controlling everything to releasing control so that companies like SpaceX, Virgin Galactic and Blue Origin could be in the driver’s seat.

Musk, Branson and Bezos are visionaries. Yes, I am certain ego also has something to do with it, but their accomplishments make us want more. Without NASA dictating things, we can now do the unexpected and the impossible.

Entrepreneurship leads to innovation. Elon Musk took electric cars from nothing more than glorified go-carts amazingly innovative and elegant pieces of technology, then applied that way of thinking to the Crew Dragon. Richard Branson took the simplicity of the X-15 concept, modernized it and made it safer and more efficient.  Jeff Bezos took boring, practical space capsules and added large windows for astronauts to gaze upon space.

The tide has turned. I guarantee this is the start of something wonderful. I have no doubt that the first Americans on Mars will likely get there onboard a spaceship envisioned by the likes Elon Musk.

While we still celebrate what we achieved more than 50 years ago, it’s about time that we have something new to celebrate. It has been way too long and because of politics, all we have basically done is underachieve. Now, with the government out of the way, we can let the innovators lead.

This is more proof that American ingenuity and the American spirit is what will drive us out to the final frontier, not the government. America has taken the lead once again. With the Dragon, we will not go quietly into the night. Why? Because we are Americans and the final frontier awaits us! 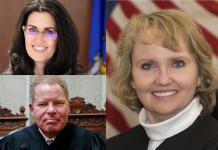 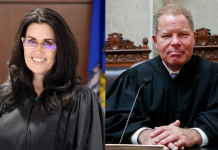