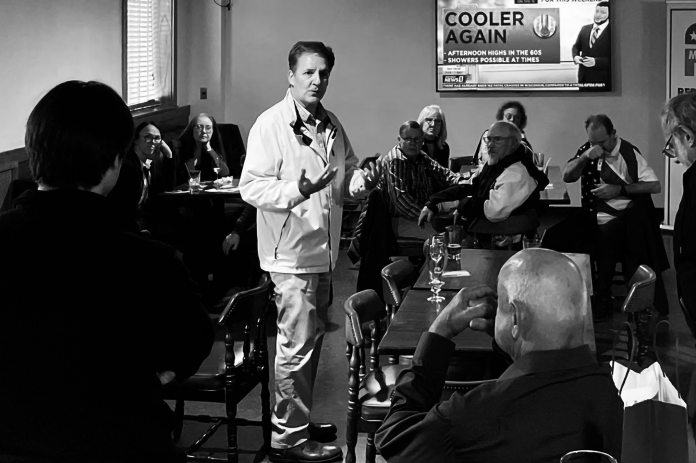 Sorry to rain on your parade, but it doesn’t matter who wins the Republican Primary for Governor in August. Unless changes are made with the Milwaukee County Republican party apparatus, WE WILL LOSE THE STATE.

A few weeks ago, I wrote an op-ed about the absolutely dismal results on election night for Conservative candidates in Milwaukee County. Even though statewide, Conservatives succeeded in taking back control of many school boards and local governments.

The poor Milwaukee County results were due, in large part, to the Republican Party of Milwaukee County and its inept Chairman David Karst They were essentially AWOL throughout the entire Spring election cycle.

My op-ed was well received by many because I stated out loud, what many were saying behind the scenes. Clearly, I struck a nerve, because I also drew the wrath of some of the Karst apologists on the leadership team. Apparently, they are content with the mediocrity of the County’s constant anemic results.

We should NEVER be happy with such failure.

At least calling David out managed to light a fire under his butt and the County Party HQ is now open six days a week, though, no evenings yet. But it’s a start.  Glad to have been a help!

As I mentioned in passing, David Karst is running for State Assembly in the 84th District, and it is that what I want to focus on here.

I was going to leave this alone, as I did not want Karst to get any more attention than needed, but today I received an email that showed that Karst would neglect the 84th Assembly District as badly as he has neglected the Milwaukee County Republicans and the State of Wisconsin. More on that later.

One of the consistent excuses being bantered about for Karst’s dismal performance and constant AWOL status is that he has a full-time job. Well, if he is so busy, then why did he even run for Chair? On top of that, many other chairs across the state have full time jobs and manage to lead toward better results.

But this begs an even bigger question. If he is having trouble managing work and being such a ‘busy’ ineffective chairman, HOW ON EARTH DOES HE HAVE THE TIME TO RUN FOR ASSEMBLY?

Was this a factor in the Milwaukee County Spring election night debacle? Hmmmmm?

Instead of immediately resigning as Chair based on his decision to run, to say nothing of his dismal results, he refuses to vacate the chair.

There is absolutely no way anybody can be able to balance running for Assembly and still be able to give the county with the 2nd LARGEST concentration of Republican votes in the state the attention it so desperately needs. Let alone someone with a consistent failing record.

Karst already had bad results without running for office at the same time, what results are we in for in November if things don’t change?

Sadly, this also shows the arrogance, cowardice, or ineffectiveness of many on the Milwaukee County Party leadership team who should have demanded his resignation so someone else could focus on the party.  SHAME ON YOU, and you all know who you are!

This is a huge conflict of interest to be a party chair and run for an assembly seat that has a primary in it at the same time!

The email I received today was from Northshore Republican Chair, Laurie Wolfe about holding a May 25thfundraiser for Karst, her direct Party Leader.  What adds insult to injury is that the event is in Shorewood, about 15 miles out of the 84thDistrict he is wanting to represent.

This is INSULTING to the people of the 84th District!

At least his primary opponent, Bob Donovan, is actually spending his time within the district, where it should be. But that’s who Bob Donovan is, he fights for the interests of the people he represents, not his own interests.

This has to be said because clearly the people of Greenfield, Hales Corners and southern Milwaukee are not good enough for David Karst to actually spend time there and hold fundraisers there. This is very telling.

Ultimately, it’s up to the voters of the 84th district to decide who they want to represent them in Madison.

We are all in the fight for the very survival of the country, let alone the state.  Unless we can do closer to 40% in Milwaukee County, we could lose Ron Johnson’s unswerving leadership in DC and could get stuck with another four years of the Evers disaster.

Much to the chagrin of the Milwaukee County Republican Party leaders, they WILL NOT silence me. We simply cannot afford to wait and do nothing simply because David Karst does not want his feelings hurt. The fight is here and now!

Milwaukee County Republicans, the 84th Assembly District, and the Wisconsin all deserve better.