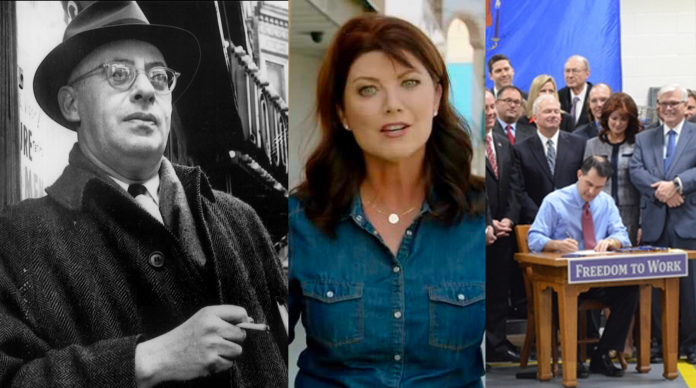 ‘Accuse your opponent of what you are doing, to create confusion and to inculcate voters against evidence of your own guilt’

Liberals are known for projection, where they accuse the other side of what they are doing. The bible they live by is Saul Alinsky’s ‘Rules for Radicals.’ The thing about those rules though, is that they are ideologically neutral.

It seems that those ‘Rules’ are now being adopted by the Rebecca Kleefisch campaign and our very own Scott Walker.  The former Governor was in a recent ad for Rebecca Kleefisch.  In that ad, Walker, without any evidence, accuses Governor Candidate Tim Michels of fighting against Right to Work Legislation.

You see, Walker is accusing Michels of the exact thing he did when he was governor. He would do everything he could to stand in the way of moving forward with Right to Work. But don’t take my word for it, let’s look at Scott Walker’s own words:

“From our standpoint, it’s never going to get to me,” said Walker. “The reality is — we’ve talked about this before — private-sector unions are my partner in economic development.”

“It’s not going to get to my desk. I’m going to do everything in my power to make sure it isn’t there.”

“The right-to-work legislation right now, as well reopening Act 10 to make any other adjustments, would be a distraction from the work that we are trying to do.”

Walker was against pursuing Right to Work until he had to sign it.

In a rare moment of leadership, the legislature ignored Walker’s cries to move on from Right to Work and FORCED WALKER’S HAND by passing it and placing the legislation on his desk. Kleefisch always leaves out Walker’s full history on Right to Work and wants voters to believe she and Walker led on it.  That’s provably false as noted above in Walker’s own words.

Was that the end of the story? Nope!

After starting his presidential bid, the one-time leader in the polls started to see his numbers plummet. To revive his failing presidential campaign, he conveniently proposed a National Right to Work legislation because the issue polled well. Unsurprisingly, people saw right through the ruse and the Walker presidential aspirations in less than 90 days.

There’s a reason Scott Walker’s endorsement hasn’t moved the needle Becky. Many conservatives have not forgotten how Scott Walker fought against things that were important to us. In Walker’s second term most of the bold conservative ideas and leadership came from the legislature.

In 2018 he said, ‘We may have reformed ourselves out of a job.’ On the contrary, the Walker Kleefisch administration stopped reforming and lost significant support.

And throughout all of the Walker blocking of important reforms, Kleefisch was silent and we all know silence is acceptance. This is why Kleefisch is basically running as Scott Walker Jr. As such, we should expect more of the same, a few accomplishments and many missed opportunities.

As for Tim Michels and Right to Work, there is absolutely ZERO evidence that he did not support it. In fact, his own company does not require union membership, it is voluntary. Because of this, over 20% of Michels employees are non-union; an unprecedented amount in the construction Industry. Hardly a track record of being anti-Right to Work.

Like I said before, the Walker/Kleefisch accusations are basically them looking in a mirror. While Scott Walker has every Right to endorse and support his Lt Governor, Rebecca Kleefisch, if he lies or distorts, I have every right to call him out.

In the end, Walker/Kleefisch have had no problem collecting tens of thousands of dollars from Michels and other roadbuilders when it benefitted them.  Becky even put Michels on her 1848 Project Executive Committee. But then when Michels had the audacity enter the Governor’s race he suddenly became the Evil Twin Brother of George Soros.

Kleefisch is clearly rattled that Michels is now leading. Did he not get the memo that it’s her turn? After all, she is entitled to be Governor, right?