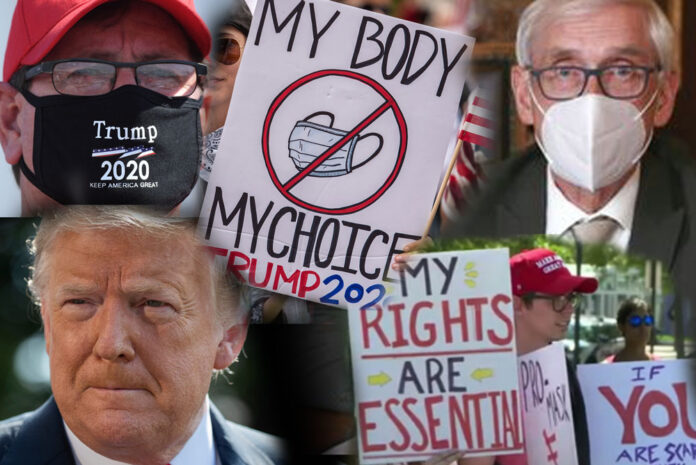 For months now, Americans have been suffering under many restrictive lockdown policies across the nation. Here in Wisconsin, Tony Evers and his unelected Obama puppet master, Andrea Palm, have used the Covid-19 crisis to commit government overreach after government overreach and people are getting fed up.

They say, ’follow the science’,  I say, we are following the science, and the science does not support the need to take such drastic actions. Months ago, Wisconsin joined other states in shutting down to ‘flatten the curve.’

A curve that never materialized. Yes, I said it, THERE WAS NO CURVE! On top of that, this was all accomplished without forcing a mask mandate months ago.

‘In a time of universal deceit, telling the truth is a revolutionary act.’

Clearly, in America today there is a growing divide between average everyday citizens and the ruling elite. This is felt in the one-sided laws that are being passed with one set of rules for us and a separate set of rules for the bureaucratic elites.

The elitists showed their true colors all over the place. Chicago Mayor Lori Lightfoot closed all hair salons for us ordinary people, but she considered herself too important and she allowed her salon of choice to open so she could get a haircut.

My favorite case was from Virginia, when people were at home getting a robocall featuring Michelle Obama talking about the importance of staying home and social distancing just a few days after her husband Barrack Obama was at a local Virginia country club playing Golf with some friends.

Do as I say, not as I do. Governor Tony Evers even exempted occupants in the state capitol building from his mask mandate.

All of this is a reaction to misinterpreted facts that have been consistently incorrect or manipulated to suit a narrative. But we are supposed to listen, because they are ‘experts’, right?

The top US Government ‘expert’, Dr. Anthony Faucci has been wrong every step of the way and has consistently contradicted himself, yet his word is still treated like gospel by the dominant media. Well, except for one thing, the fact that he said, ‘There is no reason to be walking around with a mask.’ The media seems to be ignoring this, because it does not fit their narrative.

Now, governors around the country going beyond recommending masks and are imposing mask mandates on us.  These mandates in addition to their other draconian actions, they have destroyed countless lives.

Once again, why here, why now?

The reaction to the virus has been much more detremental than the virus itself. Things like drug addiction is up, alcoholism is up, domestic abuse is up, depression up, suicides are up, poverty is up, and many other problems are becoming worse.

In their efforts to prevent the more deaths, our leaders have succeeded in killing the American way of life.

Our lives cannot be turned on and off with a switch and we cannot put everything on hold whenever a politician goes on TV and make some wild new claim about the coronavirus which inevitably will end up wrong.

Left-wing governors and mayors bankrupting the rest of America. In Wisconsin, Governor Evers’ health ‘expert’, Andrea Palm, has absolutely zero medical training, she is a social worker by trade.  And since the beginning she has been consistently wrong, why has she not been fired?

Instead Evers has doubled down in a massive mask declaration because now masks are suddenly everything, even though Wisconsin has done very well without masks all along.

We are not New York City we never were going to be. Leadership in New York is even worse than Evers. Governor Cuomo actually required nursing homes take Covid-19 patients and caused thousands of unnecessary deaths.

Wisconsin’s Covid-19 numbers have never been significant and Wisconsin hospitals have not been anywhere near capacity. Even the hospital that was created at State Fair Park remains unused after all of these months.

Now Evers wants to use Covid-19 to grab even more power and interfere in our upcoming elections. But in doing so, this is exposing his incompetence and hypocrisy.  He is pushing for a purely mail-election, because, you know, Covid-19 is making it too dangerous to vote in person.

So, in one breath, he’s pushing masks, because masks are ‘so safe’ that we must be forced to wear them. In the other breath, he’s saying masks are not safe so we cannot vote in person.

On top of that, educational ‘experts’ want to force our kids to wear masks in all day in school, completely ignoring the documented harm that will happen to them by wearing masks all day.  That is, if they even go to school. Liberals are saying masks are ‘safe’, yet teachers are all ‘going to die!’  Hyperbole anyone?

So, why here, why now?  Politics, pure and simple.

I hate to get overly political, but it’s quite obvious, the real reason this is all getting blown out of proportion by the media, and then being acted upon by mostly Liberal Democrat leaders around the country, is because President Trump beat Hillary Clinton.  The left hates him because of it.

While President Trump is campaigning for the 2020 election, the Left has yet to accept the results of 2016.

Since even before his inauguration, the left and the media have been chomping at the bit to find a way to stop the booming Trump economy, so Trump could lose in November. After several failed attempts to ‘get the mean orange man’, they saw an opportunity.

It’s plain as day, because very time President Trump acted the Left reacted in the opposite way.

After we found out the WHO and China LIED about the Covid-19 virus, Trump immediately cancelled flights from China. The left and the Media we’re quick to call Trump a racist. Turns out, Trump was right to do what he did. China was the source of the virus, and no, the Chinese government is not our friend.

Then, after some Doctors showed promise with Hydroxychloroquine, the President mentioned in a press conference that it was a viable treatment for Covid-19. Immediately the Left and the media chastised Trump for daring to show hope. They treated Hydroxychloroquine like rat poison, even though it has been used for decades for treatment of Lupus, Rheumatoid Arthritis, and Malaria. This was not a new ‘experimental drug’.

‘To control what people think, begin with controlling what they say.’

And, if you dare disagree with the elites, you are chastised, silenced, you have your videos removed from social media. Censorship run amok! This is a coordinated effort between, Democrats, the Media, and the social media giants to silence one side in an effort to control what people say so they can control what they think.

And then there’s the fact that this pandemic isn’t the only crisis being manufactured by the political elite on the left.  The recent outrage over the death of George Floyd has been amplified to the extreme while left-wing lawmakers sit back and allow businesses and whole neighborhoods to be burned to the ground.

And just as we saw a few days ago in the finally leaked body cam footage of George Floyd’s death, there’s much more to the story. Why was this footage being withheld so long?  Once again, like with Covid-in, it’s manipulation of data to create a crisis the left can capitalize on.

Now back to Tony Evers, he is merely doing the bidding of his puppet masters in order to cause chaos in the battleground state of WI, because Orange man, bad! Masks are just another tool for this manipulation.

I am not saying Covid-19 is not real. If you have a co-morbidity, it can be horrific.  What I am saying is that the ‘crisis’ is manufactured in order to try to win in November. It’s the unprecedented reaction to the crisis that gives me pause.

People who are at risk should distance and wear masks, if they CHOOSE to do so.  The rest of us need to keep the nation going as best we can so we can get through this.

This must never be forgotten, and they must be held accountable for killing the American way of life. And it begins this November, but it does not end there. I fear that our nation has been changed forever and haunts my visions of the future.