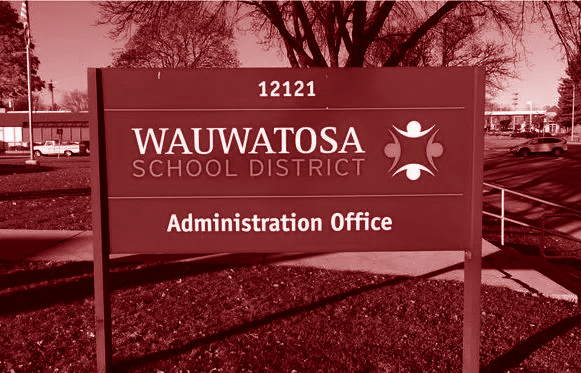 Yes, Wauwatosa Schools are a complete mess. There’s everything from the New extremist Sexual Education curriculum to all-out brawls that would UFC proud. But every once in a while there is a small glimmer of sanity.

A few weeks ago, the Extremist Radicals on the Wauwatosa School Board voted to add the grooming sexual education program under the name of ‘Human Growth and Development Curriculum (HGDC)’ to the Tosa School curriculum for ALL ages. As I pointed out in a recent article, they ‘justified’ their vote in support based on MANIPULATED data from a Survey of Tosa Residents.

Yes, Wauwatosa School Board President, ‘Dr.’ Eric Jessup-Anger, ‘Ph.D.’, and his merry band of left-wing extremist Social Justice Warriors, including extremist School Superintendent Demond Means, literally LIED to Wauwatosa that it was what parents wanted. The survey data was public for several days and showed that Wauwatosa was largely AGAINST the program.

Unfortunately, ‘Dr.’ Eric Jessup-Anger, ‘Ph.D.’ knows better than parents and in an effort to CHANGE THE RESULTS, literally called for REMOVING surveys taken from emails that were not on school lists.

The email from Marble shows that not only did they go out of their way to boot any email they didn’t know, but they also kicked results of actual parents on the district.

Armed with this manipulated data and lies, ‘Dr.’ Eric Jessup-Anger, ‘Ph.D.’ and his fellow extremists who apparently want to have hyper-sexualized elementary students, voted 6-1 to adopt the program. Board Member, Michael Meier was the only one who voted ‘NO’ on the measure.

Meier is the sole glimmer of sanity on the board.

On Friday afternoon, Meier issued an official MOTION TO RESCIND the controversial Sex Ed Program. I have pasted the full text of the motion below as well as attached a PDF here.

In his email, Meier stated:

I request that the attached Motion to Rescind Human Growth and Development Curriculum Renewal of August 22, 2022 be placed on the action agenda for the regular meeting of September 26, 2022.

As of writing this article, I have seen no response from the good ‘Dr.’ and I will update you as I get it. One thing for sure, Mike Meier needs our support. He is the lone voice of sanity on the Wauwatosa School Board and needs to be praised!

Wauwatosa families need to rise up and get this extremist garbage out of their schools NOW. I don’t know if this will work, but pressure helps.

For a district that focuses so much on ‘diversity and inclusion,’ their vote told people who didn’t like the curriculum to ‘take it or leave it.’ Not very inclusive now, is it?

Whereas the school district administration conducted an online survey of opinions regarding the proposed HumanGrowth and Development Curriculum (HGDC), and such data was maintained on the District website;

Whereas documented in an email by Nicole Marble on August 24, 2022, Board Members requested changes to the HGDC data based on criteria offered by Board Members;

Whereas documented in an email by Nicole Marble on August 24, 2022, District Officials worked to carry out thedirectives of Board Members to change the data presentation in favor of some data over other data;

Whereas the District Officials worked as in informal group of unidentified membership (Data Exclusion Group) underthe directives of unidentified Board Members acting as public officials for the purpose to exclude some survey data from public consideration by the School Board (Board); the Data Exclusion Group did not form and act pursuant to the charter given to school district administration by the Board, but was formed, operated, and acted under directive of Board government officials for a specific purpose to affect the outcome of subsequent decisions of the Board through decisions to filter data.

Whereas, although the filtering of survey data may be conducted for a legitimate purpose, the process in this case to make filtering decisions and the factors used to choose the filtered data should have been a public process as it wasdirected from the Board Members as public officials with the intent to influence the final decision of the full Board on the HGDC.

Whereas the Data Exclusion Group “effectively acted not just as staff, but as a separate,

collective, advisory body to the Board.” (See Wisconsin Open Meetings Law Compliance Guide 8, (May 2019) (citing Att’y Gen Tylka Correspondence 3 (June 8, 2005)), and operated in a manner that the activity to modify the survey data was not conducted in the course of meetings noticed and conducted in compliance with the Open Meetings Law;

August 22, 2022 regarding the Human Growth and Development Curriculum should be rescinded as an outcome of an unlawful secret and closed process. Furthermore

Whereas the decisions on parameters for modification of survey data were not made in the course of meetings noticed and conducted in compliance with the Open Meetings Law,

I hereby move to rescind Human Growth and Development Curriculum Renewal of August 22, 2022