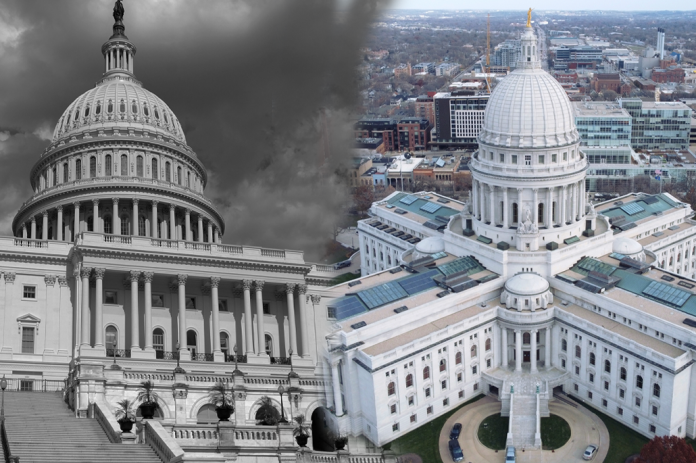 As Ronald Reagan was famous for saying, ‘There you go again.’

Rebecca Kleefisch is changing her tune again and I am beyond confused as to which Rebecca will actually govern if she were to prevail. Many of you know I have been a vocal and unapologetic supporter for Kleefisch over the years. This has left people puzzled as to why that support has wained over the recent months.

And I am not the only one.

It’s clear that many are bothered with this constant  ‘redefining of Becky’, the doublespeak from her campaign, and the mantra that it’s her turn and you best support her or you are no better than Joe Biden. This ‘inevitability’ strategy has especially changed her campaign beyond recognition.

We saw this with her convention speech. She was literally the ONLY candidate who needed to have a ‘production’ by having her entourage on stage before she came out. Then, to make things worse, she had to get ‘validation’ from Scott Walker before she spoke? Way to set the women’s movement back a few years.

Of course, Walker had every right to speak and should have, but it was strange he did not speak during the Ron Johnson timeframe as our former Governor. It’s not like his endorsement was a surprise to convention attendees and he took away about five minutes of her allotted time.

This was puzzling because she is more than capable of holding her own without needing her entourage or Scott Walker to validate her. Remember? This is the same candidate who took on the ‘establishment’ chosen one in 2010 and WON! Without the theatrics.

Like Queen Gertrude said in William Shakespeare’s, Hamlet, ‘The lady doth protest too much, methinks.’

Apparently she likes Snakes and Weasels in the ‘swamp’ more than she says. Right now Kleefisch is busy putting on her deep swamp waders as she prepares to travel away from the Madison swamp she pretends to hate, so she can dip her toes in the deepest swamp of all, Washington DC.

Traveling to DC, in and of itself, is not necessarily a bad thing, but it is when you openly and conveniently condemn the actions of Swamp Creatures in an effort to gain political points. Then, in the next breath you lay down your ‘principles’ and join the swamp creatures who support you in order to get campaign cash.

Yes, I said lay down ‘principles.’

Back on May 16th news came out that the UW Madison Board of Regents UNANIMOUSLY voted to hire Jennifer Mnookin, a WOKE, social justice, CRT peddling Liberal who makes Nancy Pelosi look Conservative. Wisconsin Conservatives, immediately and unanimously condemned the hiring. Mnookin personifies everything we are fighting against.

Kleefisch was quick to jump on that bandwagon and she immediately Tweeted out, ‘The Board of Regents’ decision to hire a woke radical like Dr. Mnookin is infuriating. Our universities need to focus on building a strong economy and workforce — not force-feeding liberal ideology to Wisconsin students.’

An eloquently stated condemnation and sentiment I, and most conservatives, completely agree with. Good for you, Becky!

Sadly, it appears to be more convenient campaign rhetoric than truth.

Kleefisch said of the Regents UNANIMOUS selection of Mnookin, ‘this ridiculous mindset demonstrates why we need to drain the Madison swamp – to get away from this crazy groupthink.’ So image my surprise to find out one of the hosts of Kleefisch’s big upcoming DC fundraiser is none other than UW Regent and Mnookin supporter, Scott Beightol.

Looks like she was not as ‘infuriated’ with the Regents as she said. It begs the question, was she really bothered by the selection of Mnookin, or was it just another convenient campaign talking point just like her ‘not liking’ the ‘swamp’. Speaking of swamp, the other host of her fundraiser is Bob Wood, a well known DC oil lobbyist. Wait! I thought she didn’t like lobbyists.

This is beyond a slap in the face to Wisconsin Conservatives, this is dangerous, because it legitimizes one of things that we as Conservatives have been united in fighting against. Kleefisch herself has been on the frontlines of this fight.

There have been rumors that her campaign coffers are dwindling, and failing to get the RPW endorsement and campaign cash did not help matters. What’s more, it was hers to lose. Because of this, it looks like her campaign has gotten so desperate that they are willing to sacrifice principle to get cash elsewhere in an effort keep her ‘inevitability’ alive.

What ‘devils’ will she have to make deals with to get this cash and what will it end up costing Wisconsin? If she were to win would she be leaving Wisconsin every weekend to play in the DC swamp much like Scott Walker did in his final years? These are legitimate questions.

I have never questioned Kleefisch’s conservative ideals and she is and has been a fighter for those ideals for a long time. What I do question is, are those principles so flexible that she will sacrifice them in an effort to get a little campaign cash and play politics?

Plus, having been basically campaigning for three years and barely getting to 32% after Walker’s endorsement, should give us all pause.

This growing list of blatant contradictions and frankly, rookie mistakes, shows that her campaign team is not ready to take on Evers should she win the primary. There is way too much at stake to put the future of the state in the hands of the same team who has lost elections over the past few years.

Ultimately, yes I will vote for her if she wins the primary, because NOTHING justifies another four years of Tony Evers. That being said, I am not confident she can beat Evers with this trend, plus she has already lost to him once.

So for now, I am holding out for a Hero so we don’t get another four with the Zero!