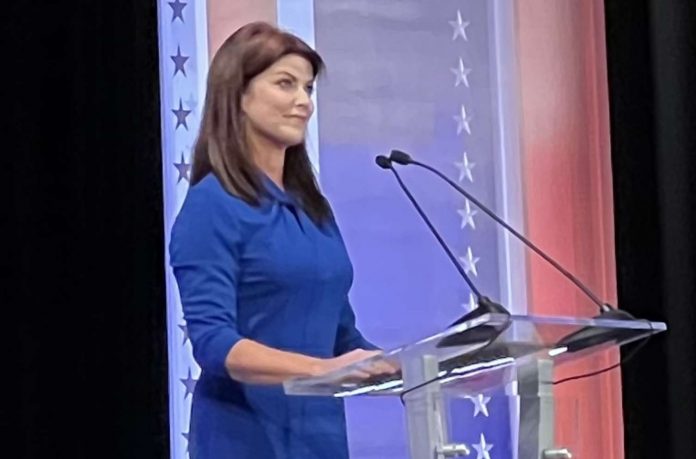 Well, since Rebecca Kleefisch and her campaign want to continue playing the dotted line game, let’s go ahead and play.

According to recent campaign finance reports, the Milwaukee Metropolitan Area of Chamber of Commerce (MMAC), Southeast Wisconsin’s largest business lobbying group has donated $70,000 to help Rebecca Kleefisch defeat conservative businessman Tim Michels in August’s GOP primary. MMAC’s lobbying efforts are currently focused on pushing legislation that would allow Wisconsin counties to raise their sales tax and they plan to continue to pursue their agenda in 2023 which means this issue will likely come across our next Governor’s desk.

Recent campaign finance reports reveal the Kleefisch campaign received a maximum $20,000 contribution from the MMAC in June. The MMAC also in June wrote a $50,000 check to Freedom Wisconsin PAC, a Madison swampy ‘Snakes & Weasels’ group and anti-Michels special interest group run by former Scott Walker campaign manager Stephen Thompson.  You may remember Thompson was the general consultant on the failed Leah Vukmir US Senate campaign.  Freedom Wisconsin has  been running several false, debunked attack ads against Tim Michels.  MMAC’s donations to help the Kleefisch campaign came weeks after Michels entered the race and polling showed him pulling ahead of the former Lieutenant Governor.

Why is Rebecca Kleefisch accepting a major donation from a swampy special interest group like MMAC that is lobbying to increase the sales tax in Milwaukee and beyond? The MMAC’s sales tax policy proposal would harm hardworking Wisconsinites during tough economic times. Kleefisch and her aligned PAC are the only recipients in the Governor’s race to receive donations from MMAC.

I guess I am bad at this dotted line game, this appears to be more of a solid line and it is important for primary voters to know: has Kleefisch pledged to support MMAC’s efforts to increase the sales tax if she is elected Governor?  Conservatives deserve an answer to this question from Kleefisch’s campaign prior to the primary.