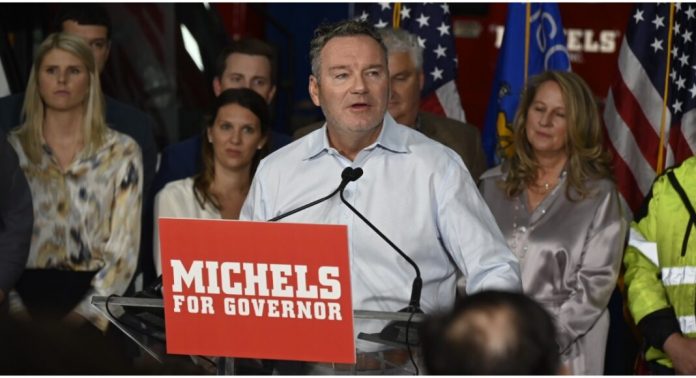 Whenever a new candidate announces for a high-profile political race, the internet becomes infested with miles and miles of hyperbolic political doublespeak.

The recent, late-hour entry into the Governor’s race by conservative businessman Tim Michels proved to be a major shock to the establishment.

The party elites were in the middle of their Rebecca Kleefisch anointment process when the buzz came out that Michels was going to officially enter the race. This was in direct conflict with their Rebecca ‘inevitability’ strategy and the elites immediately had to circle the wagons.

They immediately turned their turrets away from the current anti-establishment candidate, Kevin Nicholson, and set their sights directly on Tim Michaels.

As I was busy seeing the buzz all over social media, I noticed a specific pattern coming from some Nicholson supporters but especially coming from many Kleefisch supporters.

If someone did not know any better and just listened to the hyperbole being bantered about, one would think that Tim Michels was the evil twin brother of George Soros himself.

Tim Michels, the man who ran as a Republican Senate candidate in back in 2004 and literally got more votes than ANY Republican in state history and held the record for many years before Tommy Thompson broke it in his 2012 Senate bid. More on that later.

How did he go from that clear high point to becoming Dr. Evil? The reality is, he didn’t. It’s political doublespeak and mythology to keep the flailing Rebecca ‘inevitability’ train alive.

Now time to dispel some of this hyperbolic mythology.

It’s too late to get in the race – This one is my favorite. Under Wisconsin law, candidates have until June to get nomination papers in. There are still over 100 days left until the August primary. In 2010, late entry and relative political unknown, Ron Johnson, got into the Senate race in May and knocked off a once-popular, three-term incumbent. Campaigns are already too long When was the last time you heard someone say campaigns are too short?

Nobody knows him – With the right resources, which he has, 100+ days is more than enough time to rebuild name ID and present his positive vision for the future.

He’s not a proven vote-getter – This one is exceptionally false! In 2004 he won a four-way primary capturing over 183,600 votes. In contrast, Kleefisch got 175,280 in her 2010 primary. And then, remember the Michels vote record of 2004. Here are the top three statewide vote-getters in Wisconsin history in a regular election:

In fairness, we should talk about the one anomaly, the 2012 Recall. This was the only election cycle they were able to beat the Michels record. In a controversial election with record turnout and a lot of Democrats voting who also did not support the disastrous Recall. Incidentally, Walker and Kleefisch had to run in separate races for the Recall. Here are those numbers:

But, even in a record-high turnout election, Kleefisch only beat the Michels’ number by 556 votes. Yes, you read that right, 556 votes. Make no mistake, it was still a great number, but I am stating that her team’s rhetoric about Michels’ ability to get votes is flawed.

On a different note, Kleefisch did get 33,846 fewer votes than Scott Walker did on the recall. That is an interesting issue. Her team has to make up that deficit just to get in the game. That could be a huge liability in the general, but that’s a whole other topic.

In a nutshell, that means Michels captured more votes than the Walker/Kleefisch ticket did in 2010, 2014 and 2018. A significant point that should NOT be ignored.

Outsider vs. Insider – Some people are saying that Michaels is just an RPW insider who is trying to resuscitate the flailing Kleefisch campaign by taking votes away from Nicholson.

Obviously, he is not an insider; just think about it, he is sticking a cog right into the wheel of the Madison Establishment Elite’s plan for the anointment of Kleefisch. An insider would not dare take on the Madison Elites. On top of that, Tim Michaels is not a career politician; remember, he has not run for anything in 18 years.

In many ways, Tim Michels fulfills many ideals that people look for in a Governor.  He is a veteran who served our country as an Army Ranger; he is an executive of a company that employs over 8000 people nationwide and 3500 right here in the state of Wisconsin. He’s the only one in the race who can say that.

Plus, his personal wealth means that he won’t take special interest contributions. None! This means he can’t be bought. In today’s day and age, this makes him uncancellable.

Conservatives need to face it; working-class union votes are extremely important to win this election for both Governor and US Senate.  It sometimes seems that Conservatives forget the fact that Wisconsin is a purple swing state, not a deep red impenetrable fortress of Conservative goodness.

Ronald Reagan and Donald Trump successfully won over the working-class union vote. Remember the so-called ‘Reagan Democrats?’ After Reagan, the Republican party seemed to ignore them, and then President Trump brought them back into the fold.

Trump changed the party; we are no longer the party of the country club elites. Republicans are the party of working people – including those union workers.

ACT 10, Right to Work, and prevailing wage are all in the past. Today’s Republican Party is focused on immigration, inflation, rising crime, and education. The governor’s campaigns should be about the future, not the past.

We need to be crystal clear; the Democrats are out for blood and will drop several Million Dollars into Wisconsin to unseat their arch enemy, Ron Johnson. Choosing the best candidate for Governor is crucial to holding back these attacks.

Seeing all the hyperbolic political attacks from all sides and the Madison Establishment playing the rule-changing game in order to anoint Rebecca Kleefisch has given me flashbacks to 2012 and 2018.

Both election years had very contentious primaries, and the victors, Tommy Thompson and Leah Vukmir, spent every dime of their money to win their primaries, leaving nothing for the general. The Madison Establishment Elites hung both candidates out to dry and we lost. Of course, those Madison Elites didn’t lose; they got to keep their consulting jobs and are back at it again.

Nicholson and Kleefisch were already bludgeoning each other and spending their money to win the primary and once again, the Republican Party will likely hang the winner out to dry.  The one thing that only Michels has is the personal wealth to stave off his primary opponents and still continue the fight in the General. This is huge

Yes, one of them will win the primary. And I will support whoever the winner is. Rebecca Kleefisch and Kevin Nicholson have had months, if not years to close the deal and have not as of yet. It’s important to take a moment and sift through the politics and learn the facts; you most definitely will find Tim Michaels worth a closer look.

I do sincerely like all the front runners, and they each bring something to the table. This isn’t personal; ultimately, we have too much at stake to take such immense risks with political games and anointments and two front runners who may lack the financial resources to continue in the General elections.

If either Nicholson or Kleefisch was sealing the deal, Tim Michels would not be necessary. Give the guy a chance.  Get to know him.  Make an informed decision.

Unfortunately, the Madison Establishment elites may have derailed Kleefisch’s chances in their effort to stack the deck for her ‘inevitable’ anointment. Once this battle is over, we will need to reassess and start looking into moving the Republican Party Headquarters out of the Madison bubble. But that’s another topic for another time.