Home Elections Republican Identity Crisis and the Cancel Culture Within; is Resistance Futile? 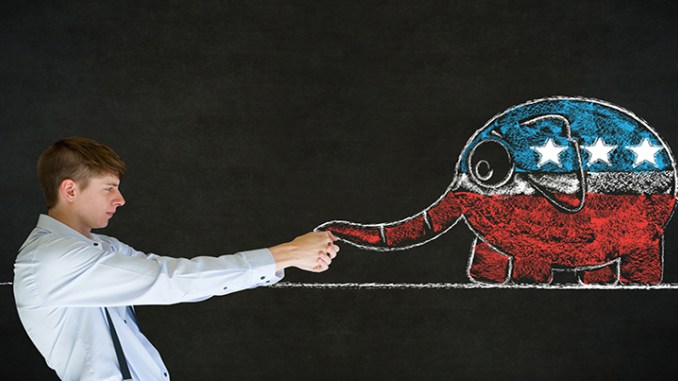 The biggest point the 2022 Wisconsin Republican primaries made clear was Republicans in Wisconsin fight hard and play to win.  That’s a good thing provided we all come together to support the ultimate primary winners.  As a result of our competitiveness, our candidates are now battle-tested for the general election – another good thing.  Democrats handed their U.S. Senate nomination to Mandela Barnes with no resistance, while Tony Evers spent the summer passing and spending of our Federal monies.

They say time heals all wounds.

On the Republican side, most are coming together in the common cause of re-electing Ron Johnson and electing our statewide ticket of Tim Michels, Roger Roth, Eric Toney, etc.  Sadly, a couple of weeks later, there is still some pushback.

There are some Conservatives who have become much more unyielding and entrenched in their beliefs because not everyone rallied around the same candidate they supported in the primary.  Honestly, that’s wasted energy better spent defeating Mandela Barnes, Tony Evers, and Josh Kaul.

Just like we saw in 2016 with then-candidate Donald Trump, there were those who were of ‘pure Conservative’ thought who felt they knew better than the rest of us. If you did not think as they did, you were chastised and canceled. Trump was not ‘perfection’ in their eyes. More on this later.

Of course, we have come to expect this from the Democrats, while they are always pontificating about how ‘diverse’ they are and how ‘big’ their metaphorical tent is; we all know the truth.

Their collective mentality reminds me of ‘the Borg’ from Star Trek fame. Just like that fictional alien collective from the TV series, the Democrats operate as a hive and only share one collective thought. There are no individuals. Anyone who dares to disagree with the collective is chastised, banished, and canceled.

Just look at what Hillary Clinton and DNC leadership did to Bernie Sanders a few years ago or more recently with Joe Manchin and Kirstin Sinema when they blocked some of the extremist Biden agenda. Gone are the days of Conservative-leaning Democrats like JFK.

In reality, the Republicans are truly the big tent party. There are countless varying degrees of Conservative thoughts and ideas. We have the evangelical Christians, the mainstream Republicans, the Tea Party, and even some Liberal Republicans, and let’s not forget some of the Libertarians as well.

Some are focused on social issues while others concentrate on fiscal issues, but even with these differences, the factions would typically unite with the one goal: beating the Democrats. When we did unite, we won.

Unfortunately, many Conservatives seemed to have learned some lessons from the Democrats. Today we have a movement by some ‘Pure Conservatives’ to ‘purge’ the party of people they consider ‘RINOS’ or supporting the ‘wrong’ Conservative in primaries, etc. This behavior effectively mirrors the Democrats with their own Conservative version of ‘the Borg.’ One collective mentality, hard right, State Republican Party leadership direction, or bust. Conservative ‘perfection’. Resistance is futile, DO AS YOU ARE TOLD, or else. Sound familiar?

A few weeks ago, I wrote an article about how Cancel Culture and echo chambers are where democracy goes to die. I then talked about how we must re-engage in civil discourse with others, even with those who may disagree with us on the Democrat side.

Unfortunately, in that article, I neglected to talk about the canceling that is going on right under our noses within Conservative ranks. Trying to make someone or something seem small, doesn’t make you bigger.

One recent glaring example of this cancel culture is how different conservatives are reacting to the investigation into the now known, nefarious activities that Democrats engaged in during the 2020 election.

That election had things happen which NEVER happened in an election before.  Things like Drop boxes, Madison and Milwaukee clerks telling people they could mark themselves indefinitely confined, keeping special voting deputies (SVD’s) out of nursing homes, pouring almost $9 million in private money into 5 democratic cities, and of course the ballot harvesting in the park scheme.

These clearly illegal activities ALL HAPPENED. In spite of that, never-Trumpers and many in ‘elitist’ Republican leadership want to ‘move on’ as if nothing happened. And if you dare to think differently from the elite Republican ‘collective,’ your ideas are labeled as  ‘conspiracy theories’ and canceled.

It’s not fair to call these things conspiracy theories when we know this ALL HAPPENED; it literally put the 2020 election outside the law. And, in the midst of all that ‘collective’ bashing of the people who want answers, those nefarious systems are largely still in place.

What a sad tribute to our tawdry, self-indulgent times.

Of course, there are varying degrees of how far we can or should go regarding the 2020 election, but MOST agree we need to stop this going forward lest we lose again under the same questionable means.

“If the right to vote is to have any meaning at all, elections must be conducted according to law. Throughout history, tyrants have claimed electoral victory via elections conducted in violation of governing law.” -Justice Rebecca Bradley

Of course, we saw this in the governor’s primary as well. Many circled the proverbial wagons around their selected candidate. Many in some camps loudly stated that if their candidate didn’t win, they would not support the winner. Many were literally canceling each other.

Well, the primary is now over, and Tim Michels prevailed, and it was decisive. Michels had a strong, compelling message; a sneaky good ground game in SE Wisconsin and the Fox Valley; and enough money to get his message out and build his grassroots support and network.

While most conservatives are acting like grown-ups and have rallied to support Michels, there are still factions from other camps who, like spoiled children, are taking their marbles and going home. One former candidate who lost by double digits is now saying the primary was ‘stolen.’ Huh? Luckily it is only a small group trying to create this drama out of thin air.

Not all collective thought is wrong and I do believe there are times when the collective must prevail. Obviously, we should ALL want to ‘collectively’ retire Tony Evers. At this moment, Tim Michels is literally the ONLY way we can do it and affect most, if not all, the change we all want to accomplish. Allowing another four years of Evers ACCOMPLISHES NOTHING.

This collective cancel culture mentality is playing right into the Democrats’ hands. We are divided and they are waiting to strike. Only with a unified front can we prevail. Nothing matters if we do not win.

Remember the 2012 Presidential election? Too many Republicans stayed home in 2012 because Mitt Romney was not a ‘perfect Conservative.’  The perfectionists wanted to prove a point. Well, this ‘proving a point’ handed Obama another four years on a silver platter. Did the ends justify the means? No!

This almost happened in 2016 with the ‘never-Trump’ movement. Luckily, their collective mentality failed, the grown-ups won, and Trump made history by becoming one of the most influential Presidents in modern U.S. history.

Sadly, in 2020, regardless of the nefarious activities of the Democrats, the never-Trumpers made a deeper impact and the quest for ‘conservative perfection’ gave us Joe Biden.

Do you think that just because the legislature will likely remain in Republican control it’s ok to lose the Governor or even the Attorney General race? We’ll get ‘em next time?

WRONG! Just look at how much damage Tony Evers has done…WITH FULL REPUBLICAN CONTROL OF THE LEGISLATURE! The ends DO NOT justify the means.   Are you really willing to let your dislike of other people and people’s opinions and candidates force you to stay home and allow the extreme left to get deeper entrenched? All to show how ‘principled’ you are and to ‘prove a childish point?’ This isn’t just principles, but you’ll be canceling all of Wisconsin and maybe the country.

Like I’ve said before, you will have your ‘principles,’ but you’ll be ‘principled’ while standing in the soup line.

What we need now is to take a deep breath and search our ‘collective’ hearts. We need to stop focusing on all the petty differences and focus on the important things. Certainly, those differences will remain, but there is common ground. Historically, Republicans ALWAYS win fiscal battles–that is our starting point. Besides, if we do not tackle the fiscal mess, we are all done anyway.

At the same time, we MUST begin to turn the tide on the culture war, the battle for our education system, and the battle for fixing our justice system. Focusing on stuff like this also will also mobilize the Trump/Reagan Democrats back to the fold. NONE OF THIS HAPPENS WITH DEMOCRATS IN CHARGE.

Now the real fight is well underway. We will have enough work fighting off the Democrat collective, we don’t need to be fighting off our own. There is much more at stake than just the Governor’s Mansion. The U.S. Senate lies in the balance, as does the Attorney General’s office. So suck it up.

We can win big, not just squeak by with 50%. We have done it before, we can do it again. This is who we are, this is our identity. We must resist acting like the Democrat collective and not become the Borg? Choose wisely, and STOP CANCELLING EACH OTHER! We have important work to do.

Tony Evers, Mandela Barnes, Josh Kaul, these names alone should be enough to get you to the polls.